Like 6 years ago when we here last, the cat population has exploded. One cruiser, Bill, had most of them fixed, except one particularly wild mama kitty. She managed to pop out 3 litters and we found homes for them, but we were never able to catch her.

In fact, like crazy people with nothing better to do than talk to cats, we sat for hours trying to coax her into the trap with fresh dorado, canned tuna and cat food. Four weeks and no luck. So we decided to wait until she got pregnant again and really hungry.

When she appeared to have swallowed a football, we set up camp again. Since we are leaving soon, this is our last chance to sterilize all the cats, because if we don't do it, no one else will and her offspring will breed fast. When that happens we usually see cats getting poisoned. So it was do or die for this mama.

After several days with her still being too smart to get in the trap, we decided to mix it up. We got a giant net, put the trap out, loaded with food while I walked around trying to get the cats accustomed to me moving with the net. After about an hour of careful manipulation, I manged to get into a good position to try springing the net.

BOOM! She exploded into the net in a wild furry fury. Teeth, claws were everywhere with both Sherrell and I standing on the edge of the net to keep her from escaping. She writhed and twisted violently, but we had no choice but to find a way to trap her. We secured the net with some rope and then carried her in it all the way to the vet. She was thrashing in protest and the vet was really impressed we actually caught this one.

Here she is during transport. It's the only photo I have. She's trying to wiggle under the car seat while being entangled in the net. 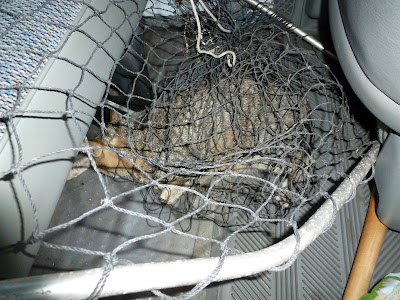 She didn't seem to worse for the experience when we released her -- all things considered. But we haven't seen her since and she's probably happily avoiding humans for a while.