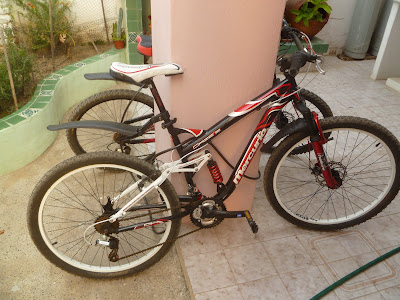 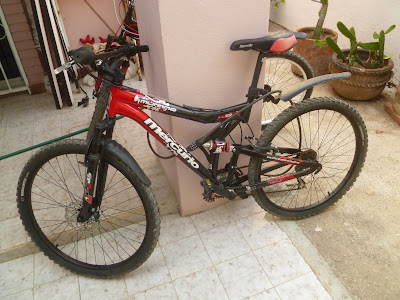 To go with our bikes we bought the BEST BEER IN MEXICO. Special ordered from the brewery in Gaudalajara, winner of the Gold Metal in the World Beer Cup: Minerva Pale Ale -- on par with Deschutes Mirror Pond, which seems impossibly good. In the house we are watching for the summer they have a "drink" fridge: 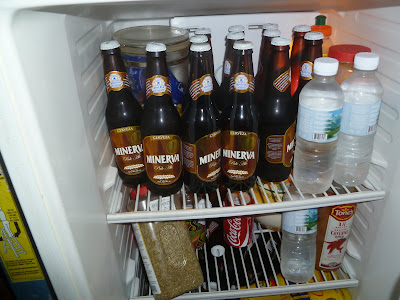 Free music and amazing surfers...what could be better? Here's some shots from today's events (we sneaked away from work for 1/2 day!) 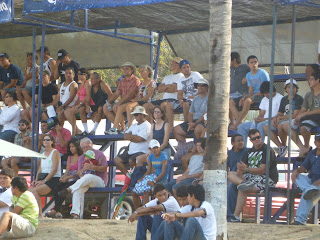 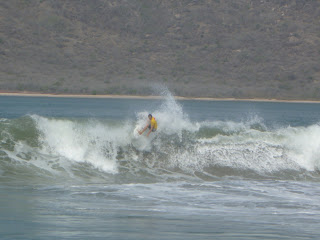 Trying to pull off a floater 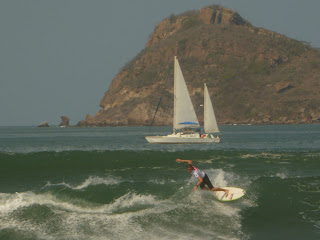 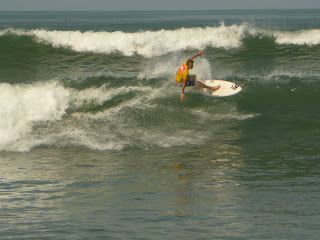 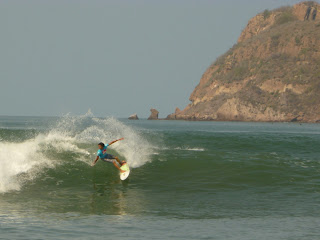 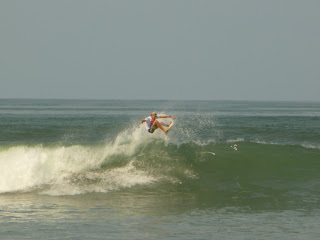 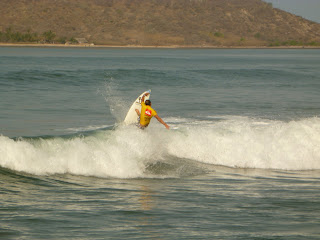 These guys even made the small waves work for them.

Lots of famous surfers are competing here. I was jealous to see such flawless surfing, wave after wave after wave. The swell is gradually decreasing too but these guys still pull off some amazing moves.

We haven't written because we've been dealing with some bad news. Almost immediately after splashing our boat back in the water, Jeannette, Ray's wife was diagnosed with colon cancer. (Ray is Sherrell's dad). So we jumped in to learn her job here in Mazatlan and we've been working for almost 8 weeks now 5.5 days a week to cover for her. We put everything on hold and are volunteering in the office until Jeannette can com back. Since we've been though a similar experience with Sherrell about 5 years ago, we know how tough this is for both of them.

On the plus side, we've been helping them research options and talk with doctors and Jeannette has recovered well from the surgery about 8 weeks ago. She's now ready to start the chemo stage of her treatment.

Anyway, that's the reason we haven't written much, done much boat work or traveled anywhere...we're office slaves again. Now I remember why I quit! Haha! 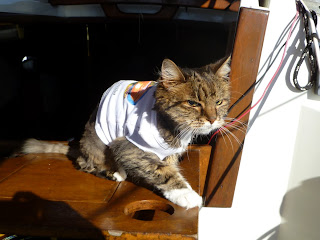 Jezebel's 20 year old kidneys finally gave out, and she passed from us today. She was a superb ship's cat, even though she never set "paw" on a boat until she was 12 years old. Honestly, we didn't think she would adapt to the cruising lifestyle at that late age, but she proved us wrong. In fact, she flourished and blossomed on the boat as she never did in a house, where she was often timid and hiding.

We will miss her terribly, but are glad we were able to share in her 20 years of life. Bien Viaje Jez.

Can you tell where we are?

Very few people would recognize Plaza Zaragosa, but how about the whole wheat cinnamon role? Oh yum...hot out of the oven. 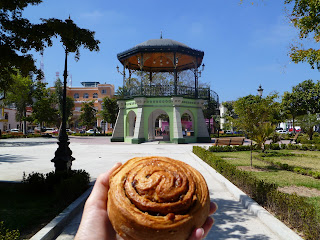 I'll only give you one hint: Mazatlan. Mazatlan's Old Harbor to be exact. We anchored a few days in Punta de Mita, a few in Mantenchen Bay and now we are anchored in the Old Harbor. There really isn't a New Harbor, but it seems everyone calls it old.

We've always wanted to anchor here to see what it is like for ourselves. Opinions are all over the board: Love it, Too Sketchy, Terrible.... Typical stuff among cruisers. For us, it's nice. The harbor is calm, we can walk to downtown. The facilities are pretty run down, but there is a dinghy dock and showers. We get to watch the ships go by (very slowly) and our favorite bakery is not far. Yeah there is a sewage processing plant nearby but we haven't been bothered by it yet after two days.

They bake the best bread and pastries. Just like old times, we bought some and ate them in the Plaza. Sometimes familiarity is a good thing.

Sky Garden for the Birds

Sometimes the things people do with their boats can take on a surreal form. Take the case of this sailboat who was trying to keep birds off his mast. He had hoisted a huge orange plastic garden rake up his mast. They do this diligently when they leave the boat unattended. To me this big rake in the sky made a distinctive image in the marina. When I first saw it, I thought of a frustrated gardener turned sailor. I mentioned it to our friends on the boat next to them and they pointed out their broom at the top of the mast. Desperate house keepers? No, they are all desperate to keep the prolific bird piles off their boats.

It wasn't until yesterday that I saw "someone admiring the nice sky rake that I felt inspired to post a photo of it. 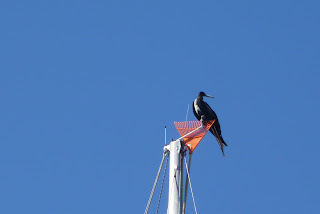 These frigate birds are notorious for breaking the small wind instruments on the tops of masts. As you can see in the photo this bird is happily sitting on the anemometer getting his back scratched by the rake.

We seem to have bad timing for capes. It took us about 23 hours to get from Chamela to La Cruz against the NW winds. The wind probably didn't get much higher than 20 knots, but since it blew continuously for miles over the sea and the current was running slightly against it, the sea was rough. Larger boats probably would have had less problems, but we were struggling to do 4 knots most of the way. We dipped our bow numerous times into the sea sending spray all over the boat. It was rough and impossible to sleep well.

Nonetheless we are anchored, cleaned up and getting ready to do a little presentation tomorrow about our Central America Guide Books for the cruisers headed south.

Sherrell wants me to mention how much more she likes this anchorage now that we have a flopper-stopper that we bought in Panama.

And we're looking forward to visiting with Scott & Liz on Tues. when they arrive.

Probably the best part about coming up from Tenactita to Chamela is we didn't get beaten up by head winds. Now if we can just get around Cabo Corrientes with the same results. We did see 3-4 whales playing out in the sea and the anchorage is nice and calm. There are about 5 other boats here which was a bit of a surprise, but I forget just how many boats are tooling up and down the Mexican coast.

I had to wear a long sleeved jacket and pants on the way up -- THAT'S how cold it is. In fact our little kitty can attest to how bad the cold weather is even in the sun she needs her "coat": 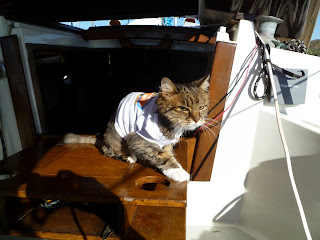 I've been lacking inspiration lately, however I'll endeavor to not bore. We enjoyed meeting new people in Barra, watching boats get stuck in the soft bottom (no damage ever occurs) and seeing familiar places again. We did the basics: felt sorry for the caged spider monkey who has been there since Sherrell first visited 15 years ago, swam in the pool, exchanged books at Beer Bob's (Bob passed away while we were gone), shopped for clothes at the market, astonished ourselves at the sheer number of gringos everywhere (especially Canadians, and yes Canadians are gringos too), had some Indo beer on tap (a rare find) thanks to Stan's detective work.

And it is always hard to leave Barra. The lagoon is better than being in a marina because it is so calm yet offers plenty of privacy. We did however manage to pry our anchor up out of the muck and sail up to Tenacatita.

We've never been here during the peak of the season like this and it was interesting to see all the boats (23 or so) here. The beach landing is pretty easy compared to later in the season when the south swells pound this shore. In fact were were surprised to see everyone landing directly on the beach, something that was impossible when we were here last.

The first boat we passed in the anchorage was Harmony, a boat that we met 4 years ago in Panama. We've exchanged a few emails in the past but there's nothing like a catching up in person. We also met the father of another boating couple we last saw 6 years ago. The sailing world is pretty small at times.

Turns out Robert from Harmony is the social director around here. They call him the mayor and he likes to get people to play nice together. We were planning on stopping here for a day or two just to clean the bottom and prop before making the push around cabo corrientes. We told Robert we weren't staying long and weren't going to put the dinghy down and join the crew on the beach. He hid his disgust well and offered us a ride. While we are not big on group activities, I joined in the boat-to-beach swim, which ended up with me on the beach wandering for ten minutes wondering where everyone was because I didn't have my glasses. And apparently it wasn't a race to the beach. And then I found myself playing volleyball while Sherrell walked the beach. We went with the flow and had good time.

I guess the crowds were a bit overwhelming for us and we didn't get to talk to Robert & Virgina much, but we did briefly meet a few new people and it was fun hanging out on the beach.

The weather has been SO cold here that we have been running the diesel heater almost every morning. Thankfully it still works after 5 years of no use. We had to buy a baby tee-shirt for Jezebel to wear to stop her from shivering during the COLD COLD night (in the 50's!). We'll post a picture when we have internet access....

Before we left Santiago, we helped the people from PATA (Personas Ayudendo Todo los Animales) do a sterilization clinic. They try to round up stray cats and dogs and also local people's animals and sterilize them for free. It was a fun to see PATA in action and help out with the animals.

We pried ourselves out of Santiago Bay and managed to motor upwind about 20 miles to Barra de Navidad. The anchorage is deep inside an estuary and the water is flat calm.

Not much has happened in the past 4 years since we were last here. A lot of the town has remained unchanged and there hasn't been a lot of growth either. There are a few changes, like the Canadian guy who calls himself "The French Baker". That guy has a his own panga now for pimping his goods to the cruisers who are anchored in the bay. His store/restaurant/bakery has had a huge upgrade too. I'm glad he's been able to make it work so well.

Well, we'll spend a little time here before moving on. It is so quiet and peaceful. Even the level of cruisers are down this year. Normally it is packed but there are only about 18-20 boats in here now, which is tolerable.

On our way from Santiago we shot some video of three whales doing their thing.