Let there be warm white light

LEDs are problematic when it comes to using them inside. The color is often a bit harsh and the light can be very focused. They are very tough however and work for years until something corrodes on them. Traditionally pre-packaged solutions are way over priced and replacement solutions are marginal with brightness and color. So we've been waiting for something good to come along.

While we were in Seattle we played around with a large light display in Fisheries Supply. One of the lights really caught our attention was the Imta's design (IMT ILSPG4-10W) with 10 LEDs, a linear current controller and a claim to be "warm white". The color of the light was nice on the display and it seemed bright in the store, so we bought one. Paying $20 for 10 LEDs with a PCB and a controller seemed like an ok price, even if the parts run about $5. It looks like this: 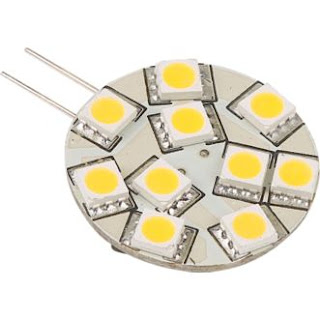 Fast forward months later back on the boat where I had forgotten about it until I was digging around in the bag with engine parts and found it. So we pulled the socket out of one of our lights and wired it in place with solder and some heat shrink.

Oh wow. When we turned it on I almost blinded myself and the color is very similar to nice incandescent glow. The best part is it doesn't get hot and only uses about 0.2 amps. Now I wished I had sprung for a few more. As long as it holds up in the marine environment I'd say we've finally found a winner.