“I would kill for some Indian food.”

I'm sure you're wondering why we've been so silient. We decided to tie up in Huatulco, Mexico this summer and go see our friends and family in the US. To do this properly (i.e. bring the cats) we needed wheels.

In addition to prepping Sarana to be alone, we have been researching RV's. Yes a full-on beater white trash machines (read: cheap). We found a class of 21' RV's that get about 16mpg (outstanding when it comes to RV's I'm told). So after scouting the internet ads we opted for me to fly to Phoenix, Arizona where there was the largest collection of these RV's. And as an added bonus I was able to crash at Sherrell's childhood friend's house and they even had an extra car for me to drive in my quest.

Well, I found it. And not only did I find our 6 wheeled (it has dual rear tires) WTM (white trash machine), I fixed it up, loaded it with Mirror Pond Ale, and drove it over 1500 miles from Arizona to Huatulco (not far from Guatemala). I crossed 12,000' mountain passes near snow covered 18,000' peaks in Mexico City. I crossed the desert, the forest, lakes, rivers, more mountains, more cities in an endless blur to return to Sherrell and our cats. 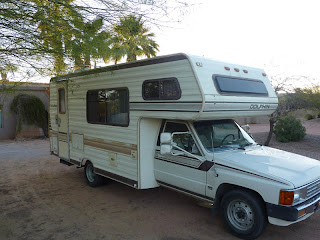 FIVE days of day-time driving and that has to be a speed record. I didn't have a single serious break down. In fact during my rest stops I spent time fixing things inside. The only problem was a $100 in bribes to some crooked cops near Mexico City and about 37 toll booths. (I took the paid roads because they are big beautiful smooth roads with emergency service phones and plenty of help if I broke down). It was a spectacular little trip to bring our WTM to Mexico. 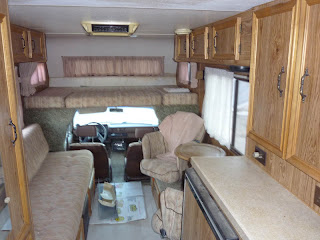 The pictures make it look bigger than it is. This is a toyota mini-truck with a box on the back. In the box is a propane stove, a electric/gas fridge, bathroom, shower, sink, water heater, and of course the bed. It's smaller than our boat, but what the hell? This thing was built in 1986 and has retro all over it. One thing for sure is RV's and boats are worlds apart when it comes to quality. RV's are junk.
But we are fixing this one up. The engine and drive train are in great shape with only 80k miles. There are some issues with the hatches and the ceiling, but we've found materials here in Mexico and are starting to fix them. One hatch blew off when I crossed the area near the Tehuantepec. Ironic isn't it? The Tehuantepec is a nasty gulf to cross in a sailboat and here the RV is what takes the damage.
Got a parking spot for us?!